A few months ago, news emerged about a little boy in the Philippines named Ken who began taking walks every day. His father followed him out of curiosity and discovered that his loving son was looking after three very sick puppies that were living on the streets. After that, Ken and his dad Kay began looking out for them.

Not long after discovering the puppies, Ken and his dad decided to rescue them. First, they were taken off of the streets and put into a temporary home inside of a garage. Given the nature of their mange, they had to be isolated and handled carefully.  That decision to rescue them turned into so much more: The Happy Animals Club.

Ken had wanted to start an animal shelter since he was 8 years old. So it makes sense that he was so dedicated to the three little pups he found. Donations and dog food from all over the world helped Ken keep these dogs healthy. First, they needed to be put on an anti-mange regimen that involved shots and lots of bathing. The donations helped them buy imported dog food for the malnourished animals, which is costly in the Philippines. Soon, the three began to put on weight, regrow their fur and learned to trust humans.

Blackie, who was fearful before, turned out to be an extremely affectionate, loving dog who would rather hug than eat dinner. She is one happy animal!

Brownie surprised everyone with a gorgeous coat.

And the little white puppy is now an affectionate bundle of joy. She loves running and playing in the park.

They leased a small lot so that they could begin rescuing dogs from the pound. So far, not a single animal welfare organization has stepped forward. The 9 year-old boy’s Happy Animals Club will be the first non-profit to start rescuing dogs from certain death, and the first no-kill animal shelter on the island of Mindanao.

Before they got to work, they got their rabies shots… Ken is happy to dedicate time to the animals, even when the city is experiencing “brownouts” due to lack of available power.

Thanks to many generous donations, work has started on the Happy Animals Club animal shelter! The first task is to build a fence so that the dogs don’t go running onto the street whenever the gate is opened. 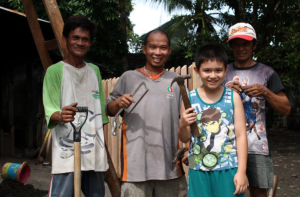 This all started as a boy who was kind hearted and generous enough to begin watching over three sick puppies on the streets. It turned into something absolutely incredible. Not only are those dogs happy and healthy, but because of Happy Animal Club and kind strangers all over the world, more dogs in the Philippines are going to be rescued. We’d like to give a big THANK YOU to Ken and Kay for all of their hard work. We also want to thank the wonderful people everywhere that sent in donations to help these dogs heal and find a home.

Heroes don’t have capes. They have big hearts.

19 thoughts on “Monday Meeting – What This Man Saw His Little Boy Doing Is Amazing. But What Happened Next? Even Better.”